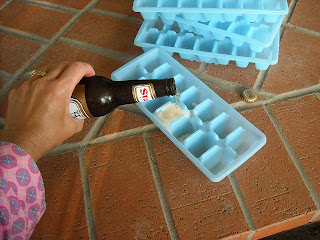 Have you ever forged ahead with a "project", even when you knew doggone-good-and-well that you had pretty much messed it up right out of the gate?

That's pretty much (I believe) why my recent shampoo bar batch is S-O-F-T.  Here's what happened:  I set the opened beer out to go flat about 48 hours before adding the lye.  Everything was going fine, until I poured the last bit of lye in a bit too fast ...(I'm impatient, as you all know)  -it bubbled up and over my batter bowl.  This meant, of course, that I had not only lost some of the beer, but I had lost some of the lye too...but how much, exactly?

Didn't know.   Still don't.   Evidently it was enough to push the batch into the "too soft" zone.  Grrrrrr!

So, instead of just wasting my lye-beer solution (had I thrown it out as I should have) I have now wasted precious oils & essential oils as well -"Brilliant, Becky -just BRILLIANT!"

Live and learn.   I actually used a bar on my hair the last couple of days & it works....but it's even a bit too rich for my dry tresses.  It works nicely as a body soap. (Although the softness is very annoying -a testament to my folly)

So today I'm shaking it off and starting over.  Pouring my Stag (used to be a local Belleville, IL brew....now make in Milwaukee, I believe) that's "Steak-Taters-And-Gravy" down here....and it's been my personal favorite beer for years.  Yes, I get some ribbing from the "Bud-Light-Sophisticates" (snobs, I don't look down my nose at their watered-down-girly-beer choice....do I?  Drink and let drink -that's my beer motto! LOL!)


Ahem.  Sorry.   Rant over.   I'm going to try freezing my beer this time....which just brought to mind a new product -"Beersicles" -wait 'til the Popsicle folks get hold of that one! LOL!  But I digress... I was contemplating freezing my beer the other day (while showering with one of the mushy bars) and wondered if it would work...then yesterday I saw Shannon at Casco Bay Soap boiling her beer.  Hmmm...then I saw that Soapchick from Naturally Made Soaps freezes her beer!  So here we go!
I'll let you all know how it turns out! 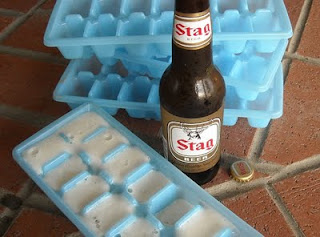 When using beer for lye base:
- let it go flat for 2 days
- bring it to a boil and simmer for 20 min to cook off all the alcohol, which - will otherwise mess with your eos or fos
- freeze it because you want to work at low temps. beer contains lots of sugar which will heat your soap up like death valley and mess things up totally

Well, I did the first step! Guess I'll boil my cubes & then re-cube....thanks for the instructions m'dear -I needed that! :)

Small adjustment...You can omit the freezing part if you're going to hp a beer based soap, but you already knew that..also, I wasn't really good in explaining why you need to cook off all the alcohol: your soap will instantly seize if you add alcohol to the equation. It's a nifty trick if you've ever stirred your arms soar because your soap base wasn't tracing. Just a small amount of alcohol will do the trick :) cheers!

When I first started making beer soap, all I did was let the beer go flat overnight - stirring occasionally until no more bubbles would form. Then I realized that boiling off the alcohol was also a good idea, so I did that too. But then I just put it in the fridge to cool it down - haven't tried freezing it! I do freeze my goat's milk though...so why not?

GOT SOAP? Visit our online shop

The Soap Sister: Home Made Soap

The Soap Sister
Southern Illinois, United States
Handmade Soap Artisan, Country Gal, Christian, Wife, Mom, Sister & Aunt who makes, talks about, dreams about, blogs about and photographs my soap-making experiences WAY TOO MUCH ... I do love handmade soap, though ...don't you?

Promote Your Page Too